I was always going to do a CyBar with a 70’s theme, I just had to think of something nice enough. I love the houses from the California hills from that decade, the furniture and art which decorated them and refined elegance of those who came to these houses for parties.

Hand written the description of the CyBar which is below is in black and then notes on putting theory into practice are highlighted text.

The 70’s CyBar – CyBar 977090DD – would be constructed from OSB board which is usually used to surround active building sites. It would require an orange “glow” to it using a form of varnish – possibly yacht varnish

Want a bathroom feel for the exterior of the CyBar. It’s chest should be 2 large mirror doors like a bathroom cabinet

Parts of the feet and arms will be studded with small square white tiles to emphasis the bathroom feel.

Want to make tops of legs wider on 97-70-90-DD to provide more support due to the weight of the CyBar.

The inside of the chest cavity, the mini-bar area, would be 1970’s themed. I want it to look like the living room of California hills house from the 70s. Houses that hung from the steep hill faces with extensive views of California through floor to ceiling windows.

The represented room would have a dipped floor. Two to three steps would go down to an area where bottles would be placed.

The floor would dip down using the steps leading to a veneered floor.

I was able to put the layered faux steps onto the base of the CyBar creating the drop down area / pit for the mini bottles to stand in. 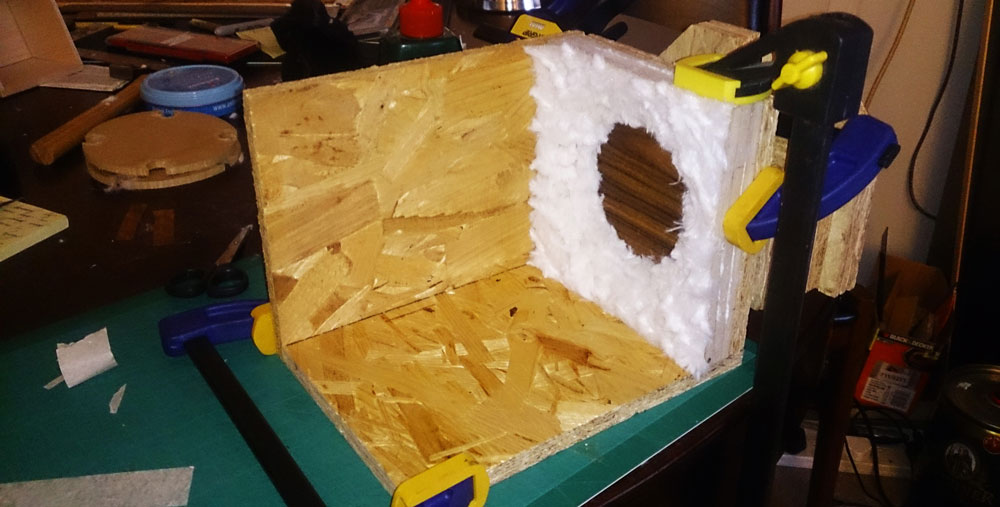 Types of Veneer to Use

For the veneer patterns for the walls of the chest cavity, I was initially thinking a circular pattern. However, perhaps rectangular with rounded edges would be better.

This pattern theory did not last long as I didn’t believe the veneer circles were good enough fitting into each other. Also, the three types of veneer didn’t complement one another at all. It was not going to look as good as I wanted it to, thus, I rejected the pattern. I then tried to create my own pattern, but this effort did not last long as I found it too frustrating and instead moved onto looking for something on the internet. After pissing about reviewing alternative patterns, day-dreaming and thinking I was productive, I located a pattern which had defined straight lines and whose pattern was based on a standard 45 degree angle. In fairness, the pattern had many layers of colour but I was able to reduce to two…the black/dark veneer I purchased on eBay and a pine veneer.

The pattern called for a standard size of diamond framed by lines of alternative veneer. I had to make each zig-zagged line of veneer to surround a line of diamonds from a continuous solid piece. However, the pieces kept snapping as the blade was either not sharp enough or I pulled to hard at the end of the cut. Also, I could never get the angle correct for numerous reasons. How can you possibly fuck up a 45 degree angle cut with a scalpel and a metal ruler?…but I did…constantly. The black veneer was so brittle and many times broke away very small chunks which resulted in so many pieces being broken and having to start again and again and again because they were not good enough. 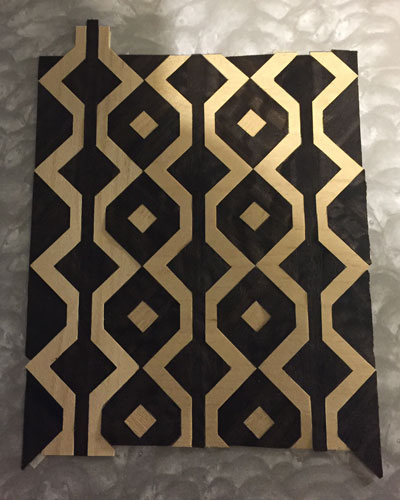 Cutting out the veneer pattern for the walls took so fucking long. It was frustrating and dis-heartening. I now regret making this pattern choice deeply as the pattern had too many reflective elements within it. I hate this pattern despite it looking complete and acceptable to someone looking in from the outside. It looks horrible to me and is a dreadfully disappointing attempt at a standard piece of veneering. I should have chosen or designed a rectangular pattern or three to four simple pieces which would have looked just as effective.

After sticking down the veneer with Impact Glue – the smell of which I use to relish but now despise – I used bee’s wax to bring out the wood’s natural colour.

Brass screws can be used to hold the CyBar together with wood glue support. I do like the idea of the brass screws as I believe it reflects the OSB board nicely.

In the back of the area, there will be two small raised areas (like pillars) on which to place two small disco lights.

Notations on the CyBar 79-70-90-DD ended here from what I can find from notebooks.

Part 2 of the blog with continue with the design and construction of CyBar 977090DD’s head, arms, door and base.