The idea to design and build lamps in the shape of vintage robots with a stylized interior that could be used as a mini bar came after a long thought process.

I was in a phase of wanting to be a street art. I had big hopes and dreams based on thoughts of life changing tags, paste ups and murals which I would put up around Dublin. I wanted to use the tops of bus shelters as I used to take the bus so often that I believed that any images on the tops of the bus shelters which could only be seen by passengers might bring a smile to the faces of commuters…and because, fuck Dublin Bus. One initial idea I had for a mural was using images of silhouettes of vintage robots combining as armies over a coloured surreal landscape. A 30’s sci-fi binary collage over an explosion of colour, if you will.

However, I realised this was a substandard idea but still like the vintage robot idea and though of incorporating it in some other way.

Around the same time, I was messing around with building custom rolling boxes. I had seen (and wanted to but) a €200 rolling box that made me go sploosh. I began thinking, why shouldn’t I just make a similar one with an empty cigar box and some coving to create specific spaces to hold different items for rolling. I began to think about and design them in my head and they were the initial reason I began to think of doing woodwork classes…to create my €200 rolling box which would be better than the one I saw.

In between rolling box dreams…I was scanning through some graffiti books (which were mostly pictures…because who has the time to read an entire book cover to cover unless the Yankees have given you three months’ severance package to cover you over the summer) looking for inspiration. Scanning the book, I saw a photo of an emptied spray can nailed to a wooden power cable post which interested me and stuck with me. The emptied can was by Buff Monster, the French graffiti artist. While it peaked my interest at the time, I recalled it as a figure created from the can. However, after looking up the picture again, as you can see from the image below, figures were just painted on to the can.

Regardless of how shit my memory is, the cans lead me to think of creating something physical which I could mount somewhere as opposed to painting something or doing a paste up. Building something wooden, like a rolling box with hidden or functional compartments, I could create figures to erect in places around the city as of form of street art. As I still liked the idea of the vintage robots, I could incorporate them as the figures being different styles of robot. After realising that the robots could easily be destroyed, the best way to guarantee longevity, would be to make them appealing with an additional function. I began thinking the robots’ chests could be used to:

To House a Gift
This was the first concept and would be comprised of two similar robots, a male and female, who would be attached to two wooden power cable posts which were on a route I used often. The robots would be a representation of myself and my girlfriend in which would be gifts for her I could surprise her with.
Hold A Camera
As I could not come up with a good theme for these robots I thought of what else I could put in the chest of the robot and I came up with the idea of a camera. Thinking of a style, I recognised that Nintento Gameboys held the same shape of the robot templates I had made. I thought of replacing the screen of the Gameboy with a one way mirror people could look at, which a wireless camera could then take a photo of if placed on the inside.
To House an Installation
As someone who was trying to dabble in street art, I thought placing an installation of some street art in the chest of one of the robots. As one iconic form of street art was the painting of 80s NYC subway trains, I thought of the idea of a model of an 80s NYC subway train cut in half and stacked vertically with a tag painted on it could be a subject for one. Another possible installation piece I thought of was making the robot’s chest a wicker cage and replicating a prison shower area which would be budgie size. I would then place a small mock budgie on the floor of one of the shower areas as if they had been shived. I have no idea why I came up with this…the closet I can come up to an explanation is I was in Hong Kong at the time and they have a bird cage market where I purchased to mock budgies, and it’s possible I was watching Oz when I came home. Bottom line is that there were a lot of strange, unnecessary ideas and possibly forced ideas before I came upon something I was happy with.

The idea I landed with came as a break through as an afterthought. I wanted to place the aforementioned trains in a specifically sized fish tank within the robot’s chest. Further thought brought to making the tank only half of the chest cavity, but what to do with the other half? As I had long thought that bars with wall to ceiling aquariums were the tits, the robots’ main function was recognised to house mini-bars.

Each robot would be created with the chest cavity being a specific style or theme mini-bar which would be reflected or matched on the rest of the body.

Once constructed I wanted to place the robots for people to find around Dublin city after taking pictures from the robot’s point of view of the city to use as pieces of art. In order for people to see them after they were erected, I needed a way for people to notice the robots. I believed a form of light was best and possibly something behind the robot to illuminate it. However, I couldn’t find a light source strong enough to drown out the light pollution of the city so it became a redundant idea. But a light coming from the robot’s head could work and also work as an additional functional element…a lamp.

I have now created a total of four such robots all with their own style.

After a long period of calling them robots, I wanted to come up with another name. After a bit of brain storming and a lot of bad suggestions on my part, a good friend suggested the excellent name CyBar…which I think is class…cheers Ste.

The next CyBar I intend to build will be a French Art Deco theme and the first to be designed with someone specifically in mind. 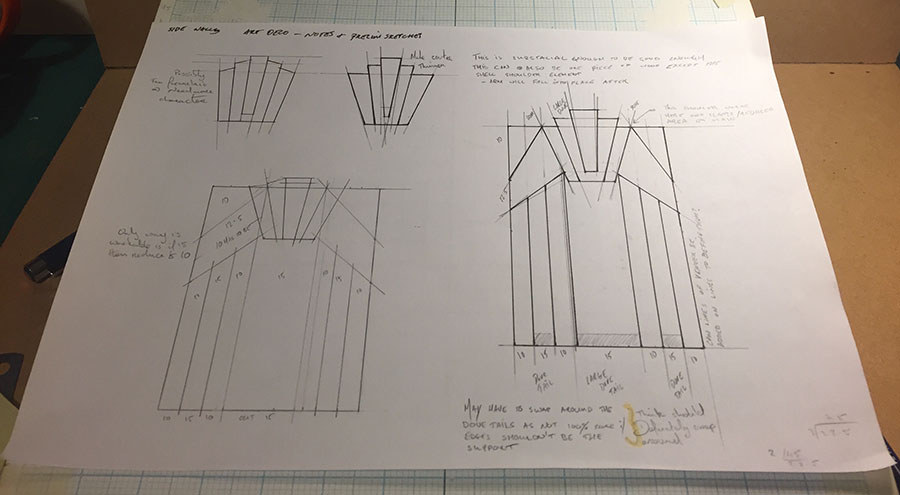 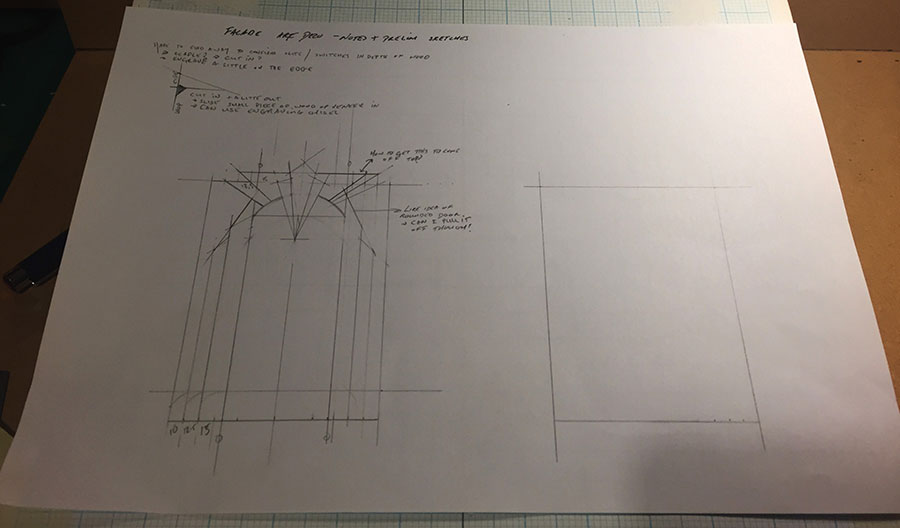 I have sketched up the walls and partial amounts of the doors. I hope to achieve the effect required through carving or paring down the wood as opposed to having to cut different sizes of wood and then stack and glue them together. This will mean the hinges will be easier to cut and be more secure.